A History of Our Church

Established in 1875, the original Presbyterian Church was constructed in Gothic style by James Brown at a price of $1,600, “not including painting”. The 24-foot by 44-foot structure was erected on the land where the Masonic Temple now stands at 20 George Street, next door to the current Haliburton United Church sanctuary. Alexander Niven (1836-1911) is reputed to have been mainly responsible for the Presbyterian church construction.

The original First Methodist Church building was built near the fairgrounds a short time after the land was purchased from the Canadian Land and Emigration Company in 1877. The building was valued at $1,200.

A fire levelled the church in 1909, and church records may have been destroyed as well; the earliest records now available are dated August 1914.

Following the fire, the Presbyterians agreed to allow their church to be used by the Methodists and passed a resolution that “the Methodist body now using this Church building pay one dollar per Sunday for use of said building until further notice and to be paid each Sabbath”. 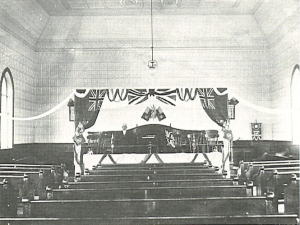 It is believed that the Methodists built the current church sanctuary at 10 George Street around 1912, complete with patterned tin roof and walls.

Between 1912 and 1918 the two churches operated with what was called a Joint Board. On the last Sunday in June 1918, the Presbyterian church was closed and those wishing to join with the Methodists in the new joint church at 10 George Street, the Union Church, were invited to do so.

Notes at the time of the Union Church’s first meeting read “Methodist Hymn Books to be used and if possible a psalm sung each Sunday”.

Major renovations were made in 1948 under the Rev. G.C. Smyth through a “Parable of the Talents” plan to multiply two hundred $5 bills given out to the congregation on a certain Sunday. The local bank manager advanced almost $1000 to back the plan and reportedly wondered if he should have had his head examined for doing so.

The venture was kept secret until the Lindsay printer of the plan literature decided it was too good a story to hide and contacted the Toronto Star. With the nation looking on, the church members multiplied their original $5 by amounts from one to ten, ultimately tripling the original total. In addition to the renovations, the funds enabled the addition of the chancel, the extension of the basement and kitchen under the chancel, and further beautification of the sanctuary with furniture, pews and a new organ.

Additional major renovations were completed in 1967. More than a third of the north church wall was rebuilt due to damage from a roof leak between the inner and outer walls. A new chimney and roof were constructed and the interior was redesigned and redecorated.

The redesign included the installation of memorial stained glass windows depicting the life of Christ. Each window is dedicated to members of families that include some of Haliburton’s original settlers. Funds were provided by special contributions and a generous trust fund from the estate of a congregation member.

Rebuilding from the Ashes

In 1972 the old manse next door to the church, by then being used for Sunday School and church offices, was destroyed by fire. A special meeting was called and construction of a new Christian Education building was approved. During construction the crumbling stone foundation on the south wall of the sanctuary was replaced, extending the width of the basement by two feet. The construction was funded by special donations, the United Church Women (UCW), a federal grant and the manse fire insurance claim.

When the former Methodist church building used by Tory Hill United Church closed in 1988, the church bell was given to Haliburton United Church and positioned in a bell tower above the sanctuary. It is rung each Sunday morning prior to the start of the service.

In 1986-87 and in the 1990s, two denominations again joined together at 10 George Street as the congregation from St. George’s Anglican Church shared the Haliburton United Church building during renovations to their church.

In 2000 Haliburton United Church celebrated the 125th anniversary of its inception with a full weekend of events.

The Christian Education building was expanded again in 2006 and now houses the Fellowship Room, the large main kitchen, the administrative and minister’s offices and the library on the main floor, and Sunday School, storage and utility rooms in the basement.

We celebrated the 100th anniversary of the sanctuary in 2012 with a full house that included several former ministers and members of some of the church’s founding families.

Today, Haliburton United Church is widely known as a community church. Our mission statement is To Know Christ and Make Him Known, and we work to make that the heart of everything we do. We support our local, national and international communities in a wide variety of ways, from providing space for life events and community programs and events to raising funds for organizations and missions. Along the way we develop strong relationships and have a lot of fun.

Please visit us and see if you’d like to become a part of our future.

Stewardship and Mission Offering: The monthly mission for July is Sleeping Children Around the World.

10 George Street at Pine Street
Haliburton, ON K0M 1S0
705-457-1891
The church is currently closed due to the COVID-19 pandemic. We're picking up messages, so please feel free to leave one.

You can find a calendar of events happening throughout the Haliburton Highlands by visiting The Community Calendar.

Detailed information about exploring the beautiful Haliburton Highlands is available at myhaliburtonhighlands.com. Helpful features include a downloadable guide for visitors.

To see our full calendar of upcoming events click HERE.

You can find a calendar of events happening throughout the Haliburton Highlands by visiting The Community Calendar.

Detailed information about exploring the beautiful Haliburton Highlands is available at myhaliburtonhighlands.com. Helpful features include a downloadable guide for visitors.

The views expressed in the following linked websites are not necessarily those of Haliburton United Church.